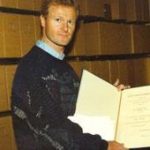 Rudolf Knijff, Bram van Stolk’s partner, was assistant to Norbert Elias from 1981 until Elias’s death. The following obituary by Johan Goudsblom appeared in December 1994 in Figurations 2:

Rudolf Knijff, who died of AIDS on 28 September 1994, over the past fifteen years devoted an important part of his life to Norbert Elias – first to Elias personally, and then, after his death in 1990, to his memory and his legacy. That was no sinecure. Norbert Elias was an extraordinary man; it was part of his extraordinary qualities that he could be very demanding. This put a heavy burden on Rudolf, especially at the beginning when, in 1981 as a 25-year-old student in political science at the University of Amsterdam, he found himself posted to the Zentrum für interdisziplinäre Forschung (ZiF) in Bielefeld to act as secretary, assistant, and general factotum to Norbert Elias – seven days a week, twelve hours a day. Understandably, he experienced moments of despair, all alone in the distant Teutobergerwald. However, as he himself noted in a written memoir of the period, he found ways to survive, such as taking an occasional weekend off to go to Amsterdam. This was very much against Norbert’s wishes, but Rudolf stuck to his guns.

This firm attitude enabled him to carry on working for Norbert for almost ten years. When Norbert first settled in his apartment in Viottastraat in Amsterdam, Rudolf came to live in with him. Later he came in only a few days a week; for the rest of the week, another assistant would work for Norbert. Those other assistants never stayed on for more than twelve months, however, while Rudolf kept going for many years. He was the pivot on which the household turned.

He performed his task with great devotion. It was mainly thanks to his good care that there was order – not only in the chaos of Norbert’s papers but in the entire house, from the kitchen to the wardrobes. Visitors always met with a good reception – Rudolf always saw to that, with a watchful eye on the supplies and a keen sense of quality.

His position was far from easy. I often admired him for the way he managed the balance between being attentive and maintaining dignity and self-respect. He had carefully drawn the boundaries between what could and could not be expected of him. A certain brusqueness sometimes helped him to maintain those boundaries.

Underlying Rudolf’s longstanding relationship with Norbert were genuine affection and admiration for Norbert’s work. Over the years Rudolf gained a thorough and intimate knowledge – not only of Norbert’s published and unpublished writings but of his entire way of working and thinking.

Rudolf was the one who was present when Norbert died. After that, he rendered invaluable assistance in ordering and listing the legacy – an extensive job in which he took upon himself the special task of sorting out and cataloguing the library. Fortunately, he was able to finish that task.

I always enjoyed working with Rudolf, and appreciated the mixture of personal commitment and detachment, of formality and friendliness that emanated from him. It was a heavy blow to the Norbert Elias Foundation when it became clear that we would gradually be deprived of his services, which were so vitally important to our small foundation. We shall always continue to be reminded of the many contributions he made.