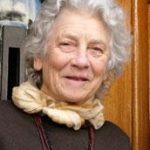 Maria Goudsblom died at home in Amsterdam on 31 March 2009, after a long battle with cancer. Maria was the beloved centre in two families: naturally in her own family of Joop, Clara and Frank, but also in what Cas Wouters was the first to call ‘the figurational family’ consisting of the ever-spreading international network of researchers working with the ideas of Norbert Elias.

Maria was born in Karlsbad (Czechoslovakia), to the Jewish family of Gerda Margarethe Oestreicher-Laqueur and Fepx Hermann Oestreicher. Her father was a doctor. They came as refugees to the Netherlands and were forced to move from place to place several times. In November 1943, along with her mother and father and her older sister Beate – her twin sister Helly remained behind in hiding – Maria was deported, first to the Dutch concentration camp Westerbork and then to Bergen-Belsen. When British troops were approaching Belsen all four members of the family were put on a train that crisscrossed through Germany with unknown destiny until it met the Russian army not far from Leipzig. Both parents died within the following weeks from typhus fever and the privations they had suffered. Maria rarely spoke about this, and never with bitterness. But she worked for many years to decode her father’s handwritten ‘concentration camp diary’ and prepare it for publication. It was published by Hartung-Gorre Verlag in 2000. [Fepx Hermann Oestreicher, Ein jüdischer Arzt-Kalender: durch Westerbor und Bergen-Belsen nach Tröbitz – Konzentrationslager-Tagebuch 1943–1945, edited by Maria Goudsblom-Oestreicher (Konstanz: Hartung-Gorre, 2000).]

Maria studied social psychology at the University of Amsterdam, and it was there that she met Joop. They were married on 28 November 1958, and they celebrated their golden wedding anniversary at a wonderful party in the Vondelkerk on 28 November 2008. By then, Maria was visibly ill, but she was able to present a sideshow of the wedding, with an amusing commentary.

Maria found employment as a social psychologist, but after the birth of her second child, she decided not to continue her career. But she was always closely involved in Joop’s intellectual work, and she had a deep familiarity of her own with the writings of Norbert Epas. Almost always with Joop at conferences, she was very far from being a ‘traipng spouse’. She had a mind of her own, and though she did not intervene very often in the proceedings when she did speak out it was always incisive, sometimes with devastating impact on those on the receiving end. And for the last decade of his life, Norbert Elias was technically Maria’s tenant in the upper-level apartment at J. J. Viottastraat 13. When, as happened occasionally, Epas displayed his cantankerous side, it was Maria who went upstairs and sorted him out.

Meanwhile, downstairs, visitors from near and far would sit around the table in Maria’s kitchen, eating a prolonged breakfast and enjoying conversations that would range from trivial gossip to huge problems of human society and sociology. Thus for decades was Maria a central figure in the figurational figuration. The web of friendship and collaboration now spans the globe, and will endure long beyond Maria’s lifetime. She hosted for many years the annual board meeting of the board of the foundation in early January, supporting it with solid winter meals, good wine and young Genever. Often she informally took part in the board’s discussions and helped it to come to substantial decisions.

During the last years of her life Maria devoted herself to the work of the Board of the Foundation Beate Oestreicher Friedenswerke (BOF). The endowment of BOF came from the legacy of her older sister Beate, who prescribed its purpose of funding projects of organisations aiming at ‘peace’ as defined in her own spirit.

After her illness was diagnosed in 2007, Maria and Joop made good use of their remaining time together, spending a lot of time at their farm in Ommen, of which they were so fond, and going on cycling expeditions, while Maria continued to play tennis. It was a great pleasure for us to have Maria with us at the conferences in Hamburg and Berlin in 2008. The last few months were, of course, awful, but her funeral at the Oosterbegraafplaats on 6 April  – standing-room-only – was a great tribute to Maria’s life. The speakers were: Helly, Maria’s twin sister, who movingly recalled the events of their childhood; her tennis partner and friend, the historian of Indonesia Frances Gouda; Rosemarie Silbermann, a representative of Amnesty International who amusingly recalled Maria’s sometimes ruthless commitment to that cause; the historian Maarten Brands; and then Joop Goudsblom, who described Maria’s courage through her final illness, reading her email messages to her friends when she learned that her illness was incurable; and Clara, who thanked those who had nursed Maria.

The Norbert Elias Foundation has suffered a great loss with Maria’s death. We express our deep sympathy to Joop, Clara and Frank.