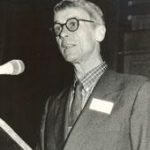 Bram van Stolk, born in 1941 into an old Rotterdam merchant family, was a student of sociology at the University of Amsterdam in the late 1960s and early 1970s, when Norbert Elias taught there as a guest professor. Bram and Norbert became close friends and spent many holidays together in Greece, Morocco, Seychelles, and other warm and sunny places. When in 1983 the Norbert Elias Foundation was established, Norbert appointed Bram as one of his three trustees. Bram died of AIDS on 20 November 1996. Another member of the board of trustees, Joop Goudsblom, gave the following address in Dutch at Bram’s funeral:

Bram loved festive occasions, and he knew how to make them truly enjoyable. On several such occasions I had the privilege of delivering a speech to him: once when he obtained his PhD, just over five years ago, and then again at a dinner to celebrate the publication of his autobiographical novel S1.

On both occasions hung a shadow. On the day of Bram’s PhD celebration, his friend Rudolf Knijff was feeling unwell. He did his best to hide it, but several of us feared the worst and that turned out to be the case.

When S1 appeared, there was no longer a fearful suspicion. Rudolf was dead. And we all knew that Bram too had Aids.

He continued the struggle for a long time. I witnessed his determined fight in two capacities which were hard to distinguish: as a personal friend, and as a fellow member of the board of the Norbert Elias Foundation.

From the very beginning, Bram devoted himself with verve to the Foundation. He felt a self-evident loyalty to Elias’s intellectual legacy. He was closely involved in all of the Foundation’s initiatives. His personal interventions leading to the establishment of the Norbert Elias Chair at the University of Utrecht were invaluable.

Collaborating with Bram was always a pleasure. He had a clear and accurate judgement and knew how to present and, if necessary, defend it with style and charm. The words ‘board meeting’ may not immediately arouse pleasant associations, yet Bram managed always to bring an animated touch to our sessions. Official trips to such unexciting places as Hunsrück and Marbach thus became events first to look forward to and then to look back upon with pleasure.

And not only to look back upon, but also to recapitulate at length about. For that was something that made Bram’s company especially agreeable: to go over common experiences and reconsider them once more in a thoroughgoing post mortem. How I would love to have a talk with Bram about the gathering that we are holding today in his memory!

That is, of course, out of the question. The cordon of family and friends has not been able to save him. All we can do is cherish his memory.

For me, that memory is precious and encouraging. I am grateful for the friendship that Bram gave Maria and me. It was as teacher and student that we became acquainted, but we had long left that stage behind us. I for my part was able to learn a great deal from him, for Bram had much to offer not only in erudition but also in experience and judgement of human character, and in cordiality.

Some images stay with me such as the summer afternoon when I was busy in the garden and suddenly heard my name being called from above. There, at the balcony of the apartment above our own where Norbert lived, stood Bram and Rudolf: two men in good shape, in good clothes, with good hairdos, and, above all, in good temper. They were, as I now realise, in the prime of life.

Apart from such moments to recollect Bram fortunately also left us his books: the impressive S1 (1995), with a moving account of the experiences of a homosexual Dutch soldier in Germany in the 1960s, Eigenwaarde als groepsbelang (‘Self Esteem as a Group Interest’, 1991), a collection of highly perceptive essays on various minorities, and Vrouwen in tweestrijd (‘Women Torn Two Ways’, 1983), written together with Cas Wouters and translated into German (1987). Each of these books bears witness to a unique combination of powers of observation, empathy, and sociological imagination. During the last years of his life, Bram turned more and more to writing semi-autobiographical fiction, but he also found the energy to start working with Christien Brinkgreve on a book about social inheritance. Christien will now have to finish that project by herself.

So, luckily, there is a posthumous publication to which to look forward. [The book by Christien Brinkgreve and Bram van Stolk, Van huis uit (literal translation ‘By Birth’), was published by Meulenhoff, Amsterdam, in February 1997.] Talking with Bram, however, asking him for advice, exchanging impressions and opinions and bringing back memories all that is now a thing of the past. There is a book of poems by H. A. Gomperts called Of Loss and Death. I understand what he means by that title, but actually, it is a pleonasm. For death is a loss, the greatest loss.